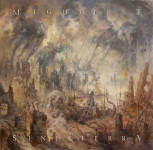 German outfit MIGHTIEST started the Black Metal scene back in 1994. After a demo and an EP, they had some line-up changes and entered a small hiatus. Come 2003 and they managed to release another demo tape and an EP with the new recruits. It is not until now, 2016, via Cyclone Empire Records that they grace us with their debut album, "SinisTerra". I remember getting their "Eden’s Fall" demo tape back in the late 90s and their brand of music hasn’t suffered a lot of changes. Their roots are deeply set in the mid 90s second wave of Black Metal, but they mix in a lot of influences, mainly Melodic, Epic and Viking Metal. After 3 or 4 spins, I keep finding traces of "Hammerheart" mixed with "The Somberlain" and then some. It is pretty obvious that MIGHTIEST has taken their time to solidify their style and succeeded. The fast parts blend perfectly with the heavy marching passages and some really good melodic lines, where the clean vocals bring in a nice variation without sounding cliché or overused. Sure, this could be tagged as melodic Black Metal, but "SinisTerra" is a great and dynamic listening experience. it offers a lot more than the standard aspects related to their style. Production wise, the guitar tone sometimes gets a little muddy, but besides that, everything else is well done; thick bass tone, heavy guitars and pounding drums. The vocals also set the band apart, since they sit in the lower register, being harsh but neither high pitched nor too deep. Great album (6 songs clocking at 48 minutes) that showcases MIGHTIEST’s well kept identity, despise the line-up changes and more than 20 years of waiting for their debut album. Totally recommended! Go ahead and contact the band here: www.facebook.com/mightiest.metal. And buy their album from their label here: www.cyclone-empire.com