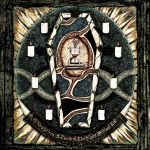 This split release, delivered by the mighty Ván Records, features two long-serving German Black Metal bands that never really became well known. Both, MIGHTIEST from Freiburg in Breisgau and East Frisian FUNERAL PROCESSION, are around for more than 25 years and have only one full length album and some smaller stuff, split releases or compilations in their discography. Thus it is a nice idea to put them on the map again with some new songs as a joint effort. Especially as both bands haven’t released any new stuff for quite a while now. “Of Deathfires, A Tomb & The Night Without End” starts off with three quite long songs (more than six minutes) from MIGHTIEST. I never heard of them before and, judging from these three songs here, I don’t seem to have missed a lot. Of course I don’t mind some melodic Black Metal for sure. But MIGHTIEST don’t really hit my nerve. On the first two songs, I sometimes feel reminded of a blackened version of early IN FLAMES or DARK TRANQUILLITY, yet without the catching qualities of these bands. And with their last song ‘Storm Of Evil’, MIGHTIEST have recorded a really terrible song. ALESTORM meets Black Metal definitely is not for me. I’m glad that FUNERAL PROCESSION are definitely more promising, as they already released some great stuff in the past. Especially their two recently re-released one-song EPs are really fine stuff for lovers of Black Metal. On “Of Deathfires, A Tomb & The Night Without End” we have four new songs (and a short intro) that should really please all those who like their Metal black and raging. Yet FUNERAL PROCESSION don’t always keep it too trve. The opener ‘…And Fyre Raineth Dovvne From The Holokavst Skie’ for example has a really old fashioned, even punkish Black Thrash vibe that rocks as hell. With ‘The Noctamantes’, we have a fantastic Black Metal song with a thrilling tension between pure rage and grinding slowness. Really a superb song! And ‘Sylent Is The Lone Voyce That Cryeth In The Vvildernesse’ delivers a lesson in raging Black Metal, with a great gloomy twist towards the end. The final ‘Moonstrvck’ surprises with a oriental sounding middle part and great galloping guitars. FUNERAL PROCESSION underline that they are among the best kept secrets of German Black Metal. Their songs alone are worth getting “Of Deathfires, A Tomb & The Night Without End”, if you are into great old fashioned Black Metal. For more info, visit www.facebook.com/mightiest.metal, https://millennialvisions.bandcamp.com or check the label at www.facebook.com/vanrecs