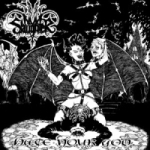 Originally released as a tape LP in 2002 this rehearsal by US cult Death Metal maniacs NUNSLAUGHTER now also gets put out on CD and vinyl. The CD version made it into my filthy hands and since I would call myself a declared NUNSLAUGHTER-supporter I really looked forward to this release. Unfortunately “Hate Your God” is a little disappointing, but definitely not as superfluous as all those dreadful live releases (e.g. “Hell In Switzerland”, “Hell In Spain”, “Hell In Afghanistan” etc.) since it offers the dedicated NUNSLAUGHTER fan an intimate view in the band’s rehearsal room and captures the atmosphere a rehearsal of Don Of The Dead, Jim Satanic Duaniac and Grim has quite well. Guitars and drums sound pretty good and despite the spontaneous setting all instruments are easily to recognize and sound better than on some of NUNSLAUGHTER’s live releases. The only set-back are the vocals, which are way to faint and do not achieve the intensity and dominance they have on the official albums or the excellent “Radio Damnation”, which is still the best NUNSLAUGHTER “live” album. “Hate Your God” is definitely not bad, the coverart is great and NUNSLAUGHTER die-hards might really enjoy it, but since there is almost a flood of releases by the Cleveland warriors of old school Death it is disputable if one really needs this album or not. Judge for yourself! And besides I do not want to do some advertising here, but TPL Records have also a huge mailorder section and they even sell some old tapes (demos and official stuff), I guess collectors might like to check that out, here’s the link: www.tpl.se