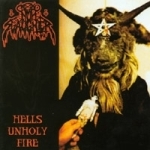 I was kinda worried already that this album would probably never ever see the light of day. You need know, that NUNSLAUGHTER have been working in the underground Death Metal scene for thirteen years by now, released a whole bunch of demos and (split-) 7"es, but – believe it or not – "Hells Unholy Fire" is still their debut (!!) full length. But it was definitely worth the long wait! First of all, NUNSLAUGHTER haven’t wimped out or changed their style of music at all and second – except for ‘Alive But Dead’ this record features ALL the songs from their classic "Ritual Of Darkness", "The Rotting Christ" and "Impale The Soul…" demos!!! And the best is yet to come: the band finally managed to come up with a totally raw, yet good sounding production. Which means you can finally lay your poor quality tapes to rest and enjoy all the classics in a proper studio quality!!! Hell yessss!!! This is excellent Old school Death Metal the way it was meant to be performed – Don Of The Dead’s voice is just fuckin’ raw and intense and the songs are short and straight to the point! Just three out of eighteen tracks (‘I Am Death’, ‘Nunslaughter’ and ‘Burn In Hell’) are longer than two minutes, the rest is beyond that mark. But it doesn’t matter at all. The band sounds the most devastating while playing in midtempo speed, cause this is how the killer riffing and voice work together best. As soon as they speed things up, everything sounds a bit chaotic and reminds me on the fast tracks by Canada’s legendary SLAUGHTER. Anyway, the mixture is pretty balanced on "Hells Unholy Fire" and should appeal to all fans of early DEATH, POSSESSED, MASSACRE etc. Single copies of the CD / LP sell for 25,-DM (ppd.). But Dani of Revenge Productions is also doing a really cool underground mailorder with tons of new and second hand stuff, so feel free to ask him for a list at: info@revengeproductions.de And in case you should order some more, the NUNSLAUGHTER record goes down to 20,-DM (the actual catalogue price) plus postage. Nice huh?!