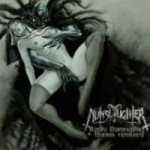 NUNSLAUGHTER’s legendary appearance at the WRUM radio station in Cleveland, Ohio (April 27, 2000) musically definitely was a feast for every fan of old school blackend Death Metal. The band used to play a full set of 22 songs (including a cover of VENOM’s ‘Hellchild’), which ended up being released on CD as "Radio Damnation" later on as well. The amazing rawness and aggression that was set free on that broadcast easily makes up for the partly quite overmudulated sound of it. But that doesn’t really matter as the overall energy is simply amazing, while the quality of the songs should be known already anyway (lots of classics from NUNSLAUGHTER’s long history got included here of course). Too bad that the band made complete fools out of themselves and their image by acting like drunken teenagers in between the songs, pretending to be extremely possessed, blasphemous and evil… Very counterproductive if you’d ask me, as it all sounds more like a parody of the whole movement, instead of underlining the seriousness of the band. China’s Area Death Productions have now re-issued this CD with six additional bonus tracks and a different packaging, including lyrics and a new coverart. The bonus tracks originally appeared on the "Satan Is Metal’s Master" split EP and "Trifurcate" EP, so that this re-issue comes up with a total of 28 tracks now. Strictly limited to 500 handnumbered copies, so you better hurry up in contacting the label if you’d still like to get one: adp.areadeath.net.