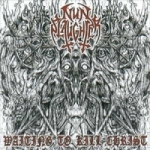 It’s unbelievable how much stuff already appeared on various different labels by these guys throughout the last couple of years (for a more detailed list make sure to click here) – but it didn’t hurt them in any way and NUNSLAUGHTER is still a highly respected underground act. Kinda weird, cause if each release would feature a METALLICA logo for example, a lot of people most certainly would already have accused them of selling out or something. But anyway, maybe it’s because alot of these releases often suffer from a poor sound as they are mainly rehearsal, live or demo recordings and therefore never sell big amounts of copies. Same with this one here. "Waiting To Kill Christ" is a rehearsal recording from July 2nd, 2001 that previously used to be available on cassette already. The main difference to the tape version is, that this CD features six additional songs, that got recorded during the same session, but remained unreleased up till now (‘Your Lord Deformed’, ‘Atheist Ways’, ‘Killed By The Cross’, ‘Church Bizarre’, ‘Emperor In Hell’ and ‘Burn In Hell’). So now you’re getting 24 songs in total of completely raw and uncompromising NUNSLAUGHTER Metal (or "Devil Metal" as they would probably prefer), including material from their entire career. All in all very cool material, but I personally would finally like to see them release some more good quality studio recordings now instead of the big amount of obscure stuff. For further info and ordering information go here: www.displeasedrecords.nl/frombeyond/index.php