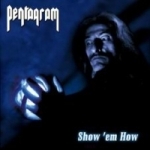 The end of PENTAGRAM… I would have never thought it was possible to write this, but unfortunately, at the light of their latest offering, now it is a reality. I am sure you will not read any bad review about “Show’ Em How” anywhere else, simply because all records bearing the Bobby Liebling mark are considered as godly as the invention of hot water on tap nowadays. This is funny, because when Peaceville Records reissued the two first PENTAGRAM albums ten years ago (thanks to them eternally for this), I don’t remember this caused such a stir, except maybe at Lee Dorrian’s home and of course in the very pages of… yes, VOICES FROM THE DARKSIDE (in the legendary printed version). But today of course, with the coming of the “True Doom” circles, PENTAGRAM (that is now: Bobby Liebling, I will explain about that), could come out with even a pile of shit (as they just did) and still receive acclaims. Besides, a lot of people forget that PENTAGRAM is not just Bobby Liebling (whatever the great composer and singer he is), but the sum of his talent combined with the one of his cohorts throughout the years (let’s only cite Victor Griffin, Joe Hasselvander, Martin Swaney, Vince McAllister, the late Randy Palmer, Geoff O’Keefe and the list goes on…). All this to say that I deny the line-up of the “Show ‘Em How” album the right to be called PENTAGRAM anymore. This is the BOBBY LIEBLING’S BAND if you want, but not PENTAGRAM. No fucking way! Liebling chose to go with basically the INTERNAL VOID line-up with the semi legendary Mike Smail (DREAM DEATH / CATHEDRAL) on drums. INTERNAL VOID were nothing but a mediocre Heavy Rock band trying to resurrect the 70s vibes, but failed miserably. So when I learned that the guitarist and bassist of this band would enter the PENTAGRAM line-up, I had considerable doubts about the result. And you know, I was right. The music on “Show ‘Em How” is so lame that I felt my heart breaking the first time I listened to it. Yet some old tracks, dating back from the 70s, are featured here, but in a massacred format. The worse example of this is the atrocious version of one of the most beautiful tracks in the entire catalogue of PENTAGRAM music: ‘Last Days Here’. The rendition of this superb song initially full of melancholia is a total mess devoid of any feeling, it became almost a joke track, so much that I felt a jolt of anger piercing my guts. You can’t say this album is produced as the sound is shitty, thin like cardboard. For instance the song ‘Starlady’ is not even mixed like the others, maybe to give the illusion of a vintage song (the initial version was recorded in the mid-70s), but the result sounds awful. I can’t even talk about the newly composed songs of this record because despite at least five listening sessions, I was left in a sort of deep coma due to a massive attack of boredom mixed with bitterness. This is a fraud, an insult to all the PENTAGRAM fans, the very first PENTAGRAM album which tarnish an until now immaculate legend. This was obviously made to gain bucks fast and easy, and rushed beyond belief (yet we had to wait an interminable period of time to finally get this joke, as if it was the ultimate masterpiece!). Some people pointed at me a good singing performance on this, it is true, and at least Bobby seems to have some fun, judging from his little screams and squawks. But believe me, the joke is on us. Fortunately I didn’t buy this wreck; somebody lent me a copy before I made this tragic error. Ironically, “Show ‘Em How” should have been the title of the “Be Forewarned” classic PENTAGRAM album (a real masterpiece this one). Well, enough said because I am utterly disgusted. This is the very last PENTAGRAM album I review for this zine, whatever comes after that. And what Doom Metal has become today is so ridicule that I prefer to stick to my old TROUBLE, WITCHFINDER GENERAL, ANGEL WITCH or, yes, PENTAGRAM records to enjoy this once great musical genre. ADIEU PENTAGRAM!