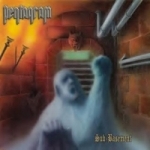 Be forewarned: you better stop reading this at once and go out to your favorite Metal shop to buy this new PENTAGRAM album at any cost. “Sub-Basement” is a masterpiece and it would be irrelevant to discuss that any further. So what follows I write only for pleasure, not trying to convince anybody. “Sub-Basement” is not a mere another album by another good band, but an act of love for the music, the fans and the rock and roll life. The title track is simply the best thing I have heard for the last five years at least, and stands right now as a classic Metal song; singer Bobby Liebling, a legend in his own right, expresses here with a mystic touch his pride to belong to the underground, without any arrogance nor pose. Liebling has never compromised himself through the 38 (!!!) years of his career, and he must be praised for that. PENTAGRAM live only for the fraternity of their fans and their own pleasure of doing music and will eternally stand as the most cult of the cult bands; this occurrence is rather unique, especially these days when only greed and cynicism count as cardinal moral traits. Musically, “Sub-Basement” is a monument of classic Doom that easily blows away your mind with its perfect thick and fat sound that will crush you into pieces. Half of the album was composed a long time ago, in the seventies to be more precise, but needless to say the old songs are totally reshaped here to match with the gargantuan heaviness of the newer ones. Far from being a sort of American BLACK SABBATH clone, PENTAGRAM could claim the same longevity really (albeit with lot of line-up changes), and have expanded their own style throughout the years. Please note that once again PENTAGRAM appear as a two-piece, namely Bobby Liebling and his faithful long-term friend and partner in crime Joe Hasselvander, the latter playing all the instruments with an enraged intensity and feeling, like it was the case on the precedent album “Review Your Choices”. The vocal performance of Liebling is beyond any criticism, as always the man graces us with his formidable talent, singing sometimes like a more sinister Gene Simmons for switching just after that to a tone reminiscent of bluesmen of old. “Sub-Basement” is about passion, integrity, and the joyous melancholy of being alone against trends and mediocrity, a feeling that should be familiar to all dedicated Metal fan. Make no mistake: this album is about all of us, so do yourselves a favor by getting it without delay. “Sub-Basement” is a gift from God.