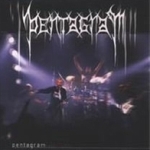 It seems to me, that after all these years Chile’s number one cult act PENTAGRAM is finally getting the treatment they would’ve deserved back in the 80s already. Following the essential self-titled demo compilation CD from 2000, here’s another CD release of Anton & the boys. "Reborn 2001" is a live album which features the band’s 2001 reunion show in superb sound quality. It’s great to hear the original line-up (except original bass player Alfredo Pena, who unfortunately passed away a while ago) playing together again in such a fine condition. They sound as convincing as always and still kick more ass than a lot of the newer bands (and that even includes Anton’s new outfit CRIMINAL, I’m afraid). Of course all of the classic PENTAGRAM demo tracks are included and they still sound incredible to me today. The entire material actually almost sounds better than ever before, due to the increased playing and recording abilities. Killer cover tunes by SLAYER (‘Raining Blood’) and VENOM (‘Countess Bathory’) complete the picture, as well as a kinda Punk / Hardcore like tune (‘Pigs’), which might be another cover – but as I’m not too familiar with that type of stuff I can’t exactly tell you. The CD comes in a nice digipak format and even includes a live-video (from the same show) for the song ‘Demented’. Essential! It would be great if this (one-off?!) reunion would last a little longer as a full length studio album is still on demand ; -) Contact: Picoroco Records: blabla@picoroco.cl