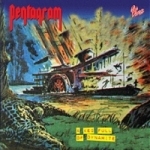 The fact this album exists is in itself a small miracle, the kind of which life in this miserable world becomes more supportable. Mind you: thanks to an Italian based label run by a bunch of true music lovers, live recordings of ultra cult Doom band PENTAGRAM captured in 1978 resurfaces in 2003 in their restored glory. I have got this one only a few days ago, yet it can’t being replaced by another record in my CD player. And believe me, it is simple to explain why. Combine killer songs (already known by any self-respecting PENTAGRAM fan), with a very special line-up (called the “high voltage” one, because of the presence of two lead guitars) with among the others a still very young Joe Hasselvander, already the accomplice of the legendary PENTAGRAM’s vocalist Bobby Liebling, and you got a fantastic sonic document. The material was recorded in The Keg, a club where they were accustomed to play at the time. Don’t expect generous applauses at the end of each track, this record is for real and the audience was without doubt scarce, but instead screams of appreciation and loud comments that set up the mood of a smoky hall haunted by underdogs. In this context, the music sounds corrosive and raw, with in particular a striking performance from both guitarists Richard Kuent and Paul Trowbridge who graces us with hallucinated solos, just listen to the end of ’20 Buck Spin’, you will be engulfed in an aural storm difficult to resist to. The vocal performance of Liebling is one of the best ever recorded on disc, the little reverb on it even adds a touch of drama in each song. The overall sound of the band belongs more to the Hard Rock type (with a dark edge though) than to the Doom side of things like it is the case with further incarnations of the line-up. Let’s say that the 1978 version of PENTAGRAM shares a lot of common traits with what began to go on in England at the time with the surging of the NWOBHM. The live recording comes with two tracks of the sole 7″ issued by the “High Voltage” line-up, namely ‘When the Screams Come’ and (again, but this track is so good ) ‘Livin’ In A Ram’s Head’, the PENTAGRAM’s hymn if you want. But enough of my rambling, be sure you get this gem at any cost. A superb release, by a fantastic band! Thanx to Massimo, Pino and Alberto of Black Widow for giving us the opportunity to discover this. Visit www.blackwidow.it and www.ramshead.org.