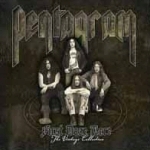 Older Voices From The Darkside readers may remember that the complete story of the PENTAGRAM formative years was covered already in the printed version (in issue # 8 I think, but don’t quote me on that) (you can, it’s correct – Frank). At the time, me among others could only dream about hearing the tracks composed by Bobby Liebling and Co during the first period of the band in the 70’s, long before the DEATH ROW line-up came in the picture. And when I read that singer / composer Bobby Liebling actually refused to sell one of his songs to the infamous Simmons / Stanley duet (because of his hope to see PENTAGRAM getting a major deal), I remember I thought PENTAGRAM should have been something very special. Well, thanks to Relapse Records, all of us can now gain access to a fragment of PENTAGRAM back catalogue of songs in a very official way, with a rather excellent sound quality considering the antiquity of the recordings. A couple of years ago, another compilation (“Human Hurricane”), covering the same period, was issued on an obscure Canadian label, but I am not too sure about the legal status of that one. “First Daze Here” is a nice collections of 12 songs with at least 4 of them never released before on CD, the rest being the original version of tracks to be found essentially on later PENTAGRAM albums in heavier and doomier form. In fact, don’t expect a festival of Doom here, because the 70’s incarnations of PENTAGRAM (the line-up happening to include two extra guitarists at different moments, Randy Palmer and Marty Iverson, with the nucleus Bobby Liebling – Vincent McAllister – Greg Mayne – Geof O’Keefe remaining stable) dealt more with a sort of a very Heavy Blues sound with a mystical touch and a gloomy edge, at some times very frightening at some others tainted with sadness and nostalgia (the song ‘Last Days Here’ being a good example of that). This CD appears like an historical document about a time long past, the primitive era of our beloved Metal music, and all of these tracks helped to build the mega cult-status PENTAGRAM now beneficiates of. One could be only in admiration before the talent of these musicians who play their songs with passion without bothering about a hypothetical overnight success. The music flows with grace, and it is obvious songs like ‘Livin’ In A Ram’s Head’ (my personal fave, a little more than two minutes of pure delight featuring a killer guitar solo courtesy of Vincent McAllister), ‘Forever Be My Queen’ or ’20 Buck Spin’ were instant classics, because Bobby Liebling was a master composer in the first place. Each of these songs is a little jewel in itself and consequently has to be treasured as a precious work of art. This review took an unexpected tragic turn when I learned that Randy Palmer died at the beginning of this month (August 2002) in a car crash. Randy contributed a famous PENTAGRAM song, namely ‘Starlady’ (featured here) and you could also hear him laying down some rhythms on two other songs also included on “First Daze Here”. Note that Randy had his own project back in the 70’s, called BEDEMON, with Bobby Liebling also singing. The band reunited some months ago to cut their first album (thirty years after their legendary first demo!), unfortunately Randy will never see the final result which will be reviewed here as soon as it will be out. Meanwhile I can only strongly advise you to get the PENTAGRAM entire discography as fast as possible because it is a cure for the mediocrity of our time. Join the Ram’s Heads at www.ramshead.org.