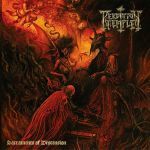 PERDITION TEMPLE hail from Tampa, Florida and “Sacraments Of Descension” is their third album. And although the band has current members and ex – members from bands such as ANGELCORPSE, ARES KINGDOM and MALEVOLENT CREATION, this was the first time I’ve heard anything from them. And I am ashamed of that last statement. This is one of the best releases I’ve heard lately, in my humble opinion. And I am going back to check their other releases as soon as possible. After the fourth spin of “Sacraments Of Descension”, I was still trying to decipher how they can come up with so many great riffs, twisted song structures and an overall savage attitude in their music. Well, it did remind me of ANGELCORPSE, but PERDITION TEMPLE has mixed successfully Death, Black and Thrash Metal in one original, violent 8 song attack. There is an intricate technical side in the band’s music that just makes it really interesting, amidst the non stop sonic assault. Gene Palubicki’s songwriting abilities are incredible, putting together super fast paced parts with slow haunting segments and an inherent headbanging character in his riffs. Bassist / vocalist Alex Blume’s performance is amazingly tight and provides a perfect backbone for Gene’s riffing. And his vocals; a pissed off mid / low pitched grunt that fits the music perfectly. Last, but definitely not least, Ron Parmer’s drumming is solid, varied and intense. Just excellent all the way through. There are constant tempo changes in every song and he manages to make them feel smooth although he is pounding the drums relentlessly. His fills come in as an integral part of each song, accenting just the right parts. The production feels organic and tight. I really like the drums and especially the cymbals. The guitars and bass are a bit throaty and midrange focused, but that doesn’t detract from the overall heaviness. The mix places every instrument where it should go, leaving the vocals behind just a tad, which took me straight back to the early 90s, as many extreme Metal bands used to do that mix-wise. Overall, one hell of a pounding sound! One can find influences from Death, Black and Thrash Metal. With so many styles covered, the resulting product draws from all extremes and yet, comes out as original and fresh (so to speak). “Sacraments Of Descension” is one album I will be going back to repeatedly from now on. It just grabs you from the throat and doesn’t let go for 34 brutal minutes. This is an amazing album from an amazing band! Go show the band some well deserved support at www.facebook.com/perditiontemple and get this album from www.hellsheadbangers.com