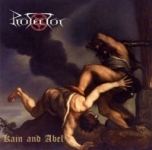 PROTECTOR once ruled the earth, I’m convinced. There’s no way such a talented, ferocious band could have escaped global notice; yet – alas! – they were doomed to obscurity. As it often happens, the underground knew perfectly well who they were, but for the casual browsers in record stores, PROTECTOR didn’t exist – and that’s a shame, because they deserved to stand aside SODOM, KREATOR and DESTRUCTION as a real representative of the German Thrash scene. The past is irretrievable, except in CD form. Here before me is the "Kain And Abel" compilation – a 2CD set consisting of 44 tracks taken from PROTECTOR’s discography. Tracks 1 – 6 on disc one are from the 1987 "Kain And Abel" rehearsal demo (unfortunately misprinted on the traycard as the 1987 München live show – Frank). Whenever it was decided to salvage these songs, the stroke of wisdom came not a moment too soon; for the songs are clearly ported from degraded tape material. Not even digital technology could hope to clean all of the warble and static up. However, raw sound is part of Metal’s charm, so don’t mistake my criticism on this point for a disdain for cheap cassette tapes. My point simply is that if the demos were allowed to collect dust any longer, the sound quality would be that much worse. The following five rehearsal tracks – dated to 1988 – are in much better condition. ‘Omnipresent Aggression’, ‘Space Cake’ and the eponymous ‘Golem’ never sounded more enjoyable; products of a band close to mental derangement. The rest of the collection is compiled of tracks pulled from live demos in München (20-12-1987), Düsseldorf (27-11-1989) and Bad Wörrishofen (11-04-1989). In particular, these songs show PROTECTOR as a band not above having a few laughs. The intro to the Bad Wörrishofen show is a bizarre, feel-good rock thing that would provoke scorn were it not for the fact that PROTECTOR was clearly doing it to be funny. If they’d been serious, then this compilation would be much shorter. As a live band, PROTECTOR are every bit as vicious as they are in studio; passionately, with vigor. Indeed, the vocalist oftentimes sounds like he has trouble keeping up with the speedier parts. In summation, "Kain And Abel" captures a band close to their peak (it’s my personal opinion that PROTECTOR achieved true greatness on "A Shedding Of Skin" and "The Heritage", both of which were released some years after these songs were recorded). The "Kain And Abel" compilation is limited to 500 copies, and is currently carried by a number of different distros, among them Hell’s Headbangers. Don’t deny yourself a thoroughly blistering chapter in German Metal history. www.myspace.com/protectorofficial, www.areadeath.net