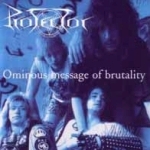 The PROTECTOR re-issue series on I Hate Records finally continues with "Ominous Message Of Brutality"… You are a worshipper of classic German Thrash Metal, but aren’t familiar with this PROTECTOR release yet? Well, never mind, cause it never came out under this title before. Just like its 2003 predecessor "Echoes From The Past" (which featured the band’s debut 2-track demo from 1986, the 1987 mini-album "Misanthropy" and 1988’s full length "Golem"), "Ominous Message Of Brutality" is basically another compilation, that chronologically comprises of the next regular releases of Wolfsburg’s Thrash Metal masters: the "Urm The Mad" album (1989) and "Leviathan’s Desire" mini lp (1990) plus four additional, good sounding live songs from a show in Braunschweig on May 1st, 1989 (originally bonus tracks on the "Urm The Mad" CD version). The whole release, which is supposed to be limited to 1.000 copies, comes up with a fat 24-page-booklet, featuring lots of pictures, all of the lyrics as well as interesting liner notes by former member Martin Missy in which he (a.o.) talks very in-depth about his panic attacks that in the end lead to his descision to leave the band back in those days. Due to the fact that the original PROTECTOR CDs are more and more difficult to find these days, it’s definitely a wise decision to pick "Ominous Message Of Brutality" and "Echoes From The Past" instead in order to get a lot of their material for a minimum of cash. Just like with the MAYHEMIC TRUTH "In Memoriam" re-release on I Hate Records my only point of criticism unfortunately concerns the quality of the booklet. Printing all the lyrics, info and liner-notes in a rather dark blue on a black background not necessarily increases the reading pleasure… But apart from that, another great release that perfectly reflects why PROTECTOR rather quickly became one of the leaders of the second wave of German Thrash Metal. For more info check out the label’s website at www.ihaterecords.cjb.net or Martin Missy’s domain http://members.chello.se/martin.missy/, which covers a whole lot of PROTECTOR information as well.