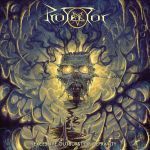 “Excessive Outburst Of Depravity” is the eighth full length album by the German Thrash Metal legend PROTECTOR. Here we have eleven tracks for almost 48 minutes of Teutonic Thrash Metal with a slight Death Metal influence. The album was released by the German label High Roller Records and the artwork is really cool with a big skull to be the master of the front cover (always a good choice in Metal). The style is typical Teutonic Thrash Metal in the vein of early KREATOR, SODOM and DESTRUCTION. It means: killer riffs and fast solos, headbanging grooves, galloping drums and a Death Metal voice à la NUNSLAUGHTER. This album is filled with speed, violence and aggressive Thrash. It’s more Thrash Metal than Death Metal, but it sounds pretty good, although well played, it’s not a masterpiece. When I think of Death / Thrash, bands like MORBID SAINT, early INCUBUS, SARCOFAGO, SODOM from “Tapping The Vein”, HELLWITCH, early MALEVOLENT CREATION, DEMOLITION HAMMER, SLAUGHTER etc. come to mind. Unfortunately this is not the case here, because “Excessive Outburst Of Depravity” is just an example of Teutonic Thrash with a Death Metal singer and a bunch of melodic solos. This album is honest and pretty genuine, but it lacks of brutality. Except for Martin Missy, the rest of the band comes from Sweden and you can hear the Swedish influence both in the production and in the guitarwork. In conclusion this is an enjoyable album, but I prefer their stuff from the ’90s. www.facebook.com/protector.666not777, www.facebook.com/hrrecords