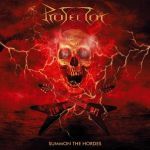 Great news from Germany: PROTECTOR is back with a killer album. "Summon The Hordes" is the title of the seventh full length effort from this legendary German Death / Thrash Metal band, recently released by High Roller Records. Ok, you don’t know who PROTECTOR are? Well, if so, you’re a poser. On the contrary, if you know who they are, you know what I’m talking about: old school and aggressive Death / Thrash Metal in the vein of early KREATOR and early SODOM. Yes, for sure, but actually I prefer to say in the typical PROTECTOR vein. Here we have ten songs of almost 39 minutes of brutal Teutonic Thrash Metal. PROTECTOR’s offer is true and autenthic: a killer old school sound and production, tons of addicting thrashy riffs, a raspy voice à la Tom Angelripper and galloping and blasting drums. "Summon The Hordes" is a successful mixture of D-Beat tempos, some fastest ones and headbanging slowdowns. Without any doubt this album is much better than the latest releases of the German super bands SODOM, DESTRUCTION and KREATOR. Why? Because in a 30-year career PROTECTOR have always remained true to the roots of the rawer German Thrash Metal genre. In conclusion, PROTECTOR never betray us, although "Summon The Hordes" doesn’t reach the levels of masterpieces such as "Misanthropy", "Golem", "Urm The Mad" or "A Shedding Of Skin", it’s a true example of traditional old school Death / Thrash Metal. And even the cover artwork has a heavy German feel with a couple of flying V guitars in the vein of ACCEPT and a skull pretty reminiscent of the early RUNNING WILD visual imagery. If you’re into pure Teutonic Thrash Metal, get this album! www.facebook.com/protector.666not777, www.hrrecords.de