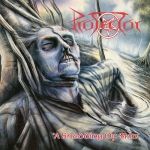 Back in 1989, after Martin Missy definitely departed from PROTECTOR, Oliver Wiebel came in to become the new vocalist of this historic German Thrash band. PROTECTOR had always been extreme, from their early Thrash days to the slower, more experimental “Urm The Mad” album, but by 1991, when “A Shedding Of Skin” came out, Death Metal was all the rage and so, naturally, they incorporated some of this sick sound into their Thrash, in my opinion without losing their personality. It must be noted, however, that the only other member in this release was drummer Michael Hasse (who would sadly leave this world not long after this), since vocals, guitars and bass were all handled by Wieber (even though Matze Grün is credited here as a bass player). These conditions, which might be very problematic for another band and might have originated a poorer album, were in fact no hindrance for them (in duo form) to release a phenomenally heavy and inspired record. Right after the disconcertingly bucolic intro, that shifts into an ominous tone, we are immediately victimized by the savagery of ‘Mortuary Nightmare’, that leaves no doubts about the nature of what follows: vicious Death Thrash that relies more on sheer heaviness than anything else; the title track is a good example as to how the songs wander between mid-paced Death and speedy Thrash. Even though many felt this was a different PROTECTOR, and rightly so I guess, the fact is that I still find an edge that has been raised straight from the old, brutal underground Thrash Metal. And if Missy couldn’t really be replaced, Wieber didn’t try to; he instilled into the band his own brand of musical ferocity, and did a hell of a job! The songs are full of inventive ideas and killer riffs, with truly bestial vocals, and a drumming pace that make up for a true headbanger of an album with very consistent quality throughout (even though I have a personal favourite in the crushing ‘Whom Gods Destroy’, all songs are killer!); all brought forth with a really heavy production (now strengthened by Patrick Engel’s remastering) that allow “A Shedding Of Skin” to be one of the definite highlights of PROTECTOR’s career. Get this reissue (which also includes a slipcase and poster of the cover artwork) from www.facebook.com/protector.666not777, www.facebook.com/hrrecords