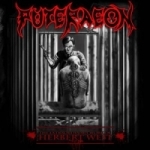 Even now, approx. 1 1/5 years after the release of PUTERAEON’s debut demo "Fascination For Mutilation" I can say that this was the most surprising and still best demotape of the current old school revival. It offers the great Sunlight guitarsound, the typical harmonies of the Swedish Death Metal movement and above all a lot of similarities to those old masters as ENTOMBED, DISMEMBER and/or especially GRAVE in the best possible form. Now we are in the listening pleasure of PUTERAEON’s third demo "The Extraordinary Work Of Herbert West". An interesting title to start with and, well, I guess I have not to explain from where the lyrical side of this CD took its influences from. Songtitles as the titletrack, ‘Experience Zombification’ or ‘Flesh Architect’ might give you some more hints, haha. As the lyrics are not included on this demo CD I think I have to focus on the music only, which isn’t the worst idea here. "The Extraordinary Work…" follows the tradition of "Fascination For Mutilation" and "The Requiem" and offers Swedish Death Metal in the magnificent sound of the early nineties. This is typical Swedish Death Metal, and there’s no need to distract from that as PUTERAEON is offering the highest class of this unholy type of Metal. Besides offering what you expect from this band and style I have to say that PUTERAEON increased even more in songwriting, soundquality and professionalism. Where "Fascination For Mutilation" was an immense surprise for me and "The Requiem" the expected follow up, this third one is the step into higher levels. A little bit more naughtiness and "The Extraordinary Work Of Herbert West" would be a classic. I still wonder why Jonas from PUTERAEON is still taking care for everything and why no label showed interest so far, but perhaps this underground attitude is what we all should ask for when talking about our beloved Death Metal. Support it – a killer demo CD. Get in touch with Jonas via deathvirus666@hotmail.com and buy this CD and their predecessors now. Check out their new myspace-profile at www.myspace.com/puteraeon666, too.