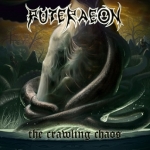 It’s not a secret that the Swedish style of Death Metal is again very popular right now. Lots of bands adopted this style for their music in the last few years, from all over the world. But also in Sweden itself there are tons of new bands who bring new glory to Metal of Death. One of the first bands of the “new wave” were PUTERAEON. After three demos and two full length albums, their songs on the latest part of the “Imperial Anthems” series of split 7”es (where they teamed up with their mates REVEL IN FLESH) gave a taste of what was to come on their third and newest album “The Crawling Chaos”. Thus I expected PUTERAEON to continue walking the path they chose on their previous albums “The Esoteric Order” (2011) and “Cult Cthulu” (2012). And at least those expectation were answered. But sadly, PUTERAEON didn’t completely meet their own (high) quality standards they set up with the first two albums. Of course there are great songs like the very variable opener ‘Wrath’ or the cool ‘In Dreamdead Sleep’ with its bold ENTOMBED vibe – reminds me a lot of the “Clandestine” – album. But for the first time, there are some weaker songs like ‘Asenath’ or ‘From The Ethereal Vortex’, that somehow miss the final kick in the balls. Well, this is just complaining on a high level, to be honest. Overall, “The Crawling Chaos” is a good album to me, since it features the strength of PUTERAEON: variable songwriting, combined with an intuition where to place the right dose of harmonies and melodic guitar leads that makes an at least good Death Metal record. Further, there are enough very fine tracks like ‘Pickmans Model’, with its creeping middle part. Or just check the ass kicking straight forward ass kickers ‘The Abyssal’ and ‘Rotten Aeon’, the latter already known from the split 7”. And the final ‘Welcome Death’ is another slower cruncher that ends up the album in a dignified manner. So, if you’re into PUTERAEON already, you won’t do anything wrong. If you haven’t checked them out yet, do so at www.puteraeon.com or www.facebook.com/pages/puteraeon/350494341729, where you can find out about a still damn good traditional Swedish Death Metal band. And never forget the label at: www.cyclone-empire.com