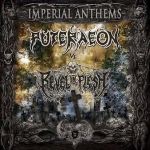 Some of you, especially the vinyl junkies, might have heard about the “Imperial Anthems” series of split 7”es from Cyclone Empire. For those who haven’t: these 7”es combine two bands that have something in common and unleash exclusive material on mankind. For the thirteenth part of the “Imperial Anthems”, the Swedish Death Metal traditionalists PUTERAEON teamed up with REVEL IN FLESH, German partners in musical crime. Both bands played a mini-tour together in Northern Germany last summer, a truly great event. Now they share these memories on a joint vinyl effort. PUTERAEON contributed two new songs as an appetizer for their upcoming third album. The straight smasher ‘Rotten Aeon’ is planned for that album and it wets the appetite for classy Swedish Metal of Death. To be continued… The Cthulu maniacs also serve us ‘To Steal The Flesh’, which features all the trademarks of PUTERAEON: melodic leads, classic riffing and uptempo parts – nothing really new from their side, but high quality guaranteed. The other side of the 7” record was taken over by REVEL IN FLESH, who unleash an unreleased song. ‘A Chant Of Misery’ was recorded for last year’s “Manifested Darkness” album, but was omitted due to the restricted playing time of a vinyl LP. But this doesn’t mean the song is just leftover carnage. Instead, ‘A Chant Of Misery’ is a little more experimental without leaving the well known REVEL IN FLESH cosmos. Keyboards add their part to the more darkened atmosphere of this basically slower song, that is more in the tradition of ‘Bonecrusher’ from their split EP with REVOLTING. But with some faster and some groovier parts ‘A Chant Of Misery’ really made my day. One more reason to tell you that it’s definitely worth getting this EP, unless you’re a pitiful victim of the digital rebellion. But be quick, since there are only 500 of them on golden vinyl available. So visit the label site: www.cyclone-empire.com. For PUTERAEON, check: www.facebook.com/puteraeon or www.puteraeon.com, for REVEL IN FLESH go to: www.facebook.com/pages/revel-in-flesh/304228902958414 or revelinflesh.jimdo.com.