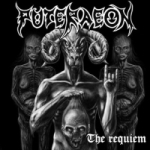 “Fascination For Mutilation” is a killer demo and one of the biggest surprises of this year. That’s how I want Swedish Death Metal to sound like. Because of this first output from PUTERAEON I was really excited when I received their 2nd demo “The Requiem”. High expectations so to say, but did the demo fulfill them? Partially, I would say. “The Requiem” is a great demo with a fantastic sound (recorded at Studio Stunlight again) and offers again pretty long playing time for just a demo with 8 songs (plus the intro ‘The Requiem’) of old school Death Metal in the tradition of especially old ENTOMBED. The songs itself are all very good, Jonas’ voice is very outstanding and I’d say I would recognize him if some one would ask me – something which is not self-evident for a Death Metal vocalist. The only problem I see is that “Fascination For Mutilation” was such a surprise when I heard it the first time and it is nothing else than one helluva a great demo each follower can only loose. If this 2nd demo would have been the first one and the first one would be the 2nd one I would totally flip out now. But as it is vice versa I can say that “The Requiem” is a pretty good successor of “Fascination For Mutilation”, though the first one is the better demo. Well, I always have a bad feeling to write something like this about the 2nd demo of my faves PUTERAEON. Anyhow, “The Requiem” is a great demotape many many bands, even established ones, would be so proud of, and I hope that this review doesn’t sound negative as it shouldn’t. The facts are quite simple: “Fascination…” was such a killertape that the expectations for the 2nd demo were so high that it’s a hopeless endeavour even for an amazing band as PUTERAEON. Still I can confess that PUTERAEON is one of the most promising bands to date and everyone into old school Death Metal needs to have both demotapes from them. Make your own decision which one is the better CD, both offer Swedish Death Metal par excellence. “The Reqiuem” sells for 5€/5$. Get in touch with Jonas at deathvirus666@hotmail.com today! And check out the interview here on Voices From The Darkside!