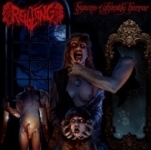 In how many bands does Roger “Rogga” Johansson play? So many, that I am sure any respectable Death Metal fan has at least one recording with him in his collection… PAGANIZER, THE GROTESQUERY, THOSE WHO BRING THE TORTURE… those were the ones I can recall by memory… and all of them are one way or other enjoyable… to be honest I haven’t heard this band, which with this release is presenting their fourth album… and let me tell you that this is probably the best band Rogga participates in… it is a full force of evil Swedish Death Metal, with some melody, which reminds a bit of the first DISMEMBER and GRAVE albums and for some unknown (dead) forces it also recalls early DEATH / MASSACRE. The riffs are there, and the heaviness is there, the guttural yet quite very distinctive and appropriate death vocals are there… and above all things the band worships the old horror movie scenes, thus giving that undead sense to the music. One can almost feel the influence of horror movies from the 70s and 80s turned out to Death Metal music from the 90s in this 2012 release. If you know Rogga, then this is a must buy. If you don’t, and you miss the days where Death Metal was about, well, death and blood, this is for you. And obviously if you are a classic horror movie fan, and think that Death Metal is the music that goes along well with a deadly “finesse” then this is it. Now this woke up my interest in the earlier efforts of the band, and I must tell you they are all in the same caliber. Horror Death Metal cannot get any better. For more info check out www.facebook.com/pages/revolting/144322252254789, www.fda-records.com