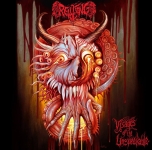 Lots of people and followers might say: “Ooo wow, another Rogga album, how interesting…” What would you think if I tell you that a band like REVOLTING is now giving a step ahead? Let’s be honest, Rogga (Johansson) is one of those guys that you either love or hate, no mixed feelings. And while most of his projects can (tend to) sound very alike, he also tries to put himself out of the comfort zone just a little bit, just the right amount to write stuff from a different perspective. 6 years have passed since REVOLTING’s debut and the 3 guys involved are still part of it. And now putting out their 5th release (meaning they have recorded a new record every 14 months) might not sound like a big event, however Rogga sounds / feels a bit more comfortable writing faster songs than before. Most of the albums from Rogga have that mid-tempo vibe through the entire record, but this time he managed to put fast and aggressive sections mixed with slow parts and even with more iconic and melancholic solos and keyboards (think DEMIURG, but faster). You can hear the band did try to release a bigger and memorable record this time around. Production wise it sounds close to their previous outputs but with an edgier treble specter on top. The artwork looks different from what the band has released before, could be a sign of maturity and evolution. Even when Rogga is putting out other releases this year, you can find something interesting in this release that might (or might not) make you change your mind about him. Go check the band and album here www.facebook.com/pages/revolting/144322252254789, www.fda-records.com.