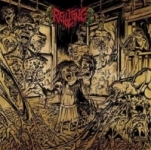 First off, I want to say "The Terror Threshold" is a major improvement since 2009’s "Dreadful Pleasures". Most of the merit goes to Rogga Johansson and his never ending creativity in all his bands / projects. But Grotesque Tobias (bass) and Mutated Martin (drums) also add a lot to the album with their playing. There are no fillers here at all. You can listen to it non stop. Yeah, it is that good! It’s got a muddy and heavy as hell production, full of great headbanging riffs. Although there is some eerie melody from time to time, the album is not based on it. And that is definitively a plus. "The Terror Threshold" sounds like the bastard child between IMPETIGO’s "Horror Of The Zombies" and the underrated gods FESTERDAY. Most of the songs are medium-paced Death Metal, with some blast beat variations. The vocals are totally awesome, raging from deep growls to some really evil shrieks. The guitars and bass have a great chunky tone, even though the bass is somewhat buried in the mix. Maybe the drums are my only complaint. They sound a little plastic; maybe they were triggered but that is all. In an endless list of new bands paying homage to the early 90s Swedeath sound, REVOLTING scores high in every department. Go get this one now! You can also contact the band to let them know how awesome their new album is. I did! Contacts: www.myspace.com/revoltingdeath, www.razorbackrecords.com