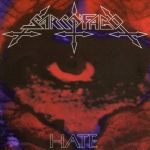 SARCÓFAGO needs no introduction, but for those of you unfamiliar with their material after 1991’s "The Laws Of Scourge", "Hate", released in 1994, is the first full length they did after "Scourge…" (not counting the "Crush, Kill, Destroy" EP in 1992). "Hate" marks the beginning of SARCÓFAGO’s experiments with drum machines, those mechanized leeches of soul. However, unlike later recordings, the programmer didn’t make the drums too loud, as is the case on "The Worst" which came out later, making this an album which it is not a chore to listen to. The sound of the album is powerfully loud and clangorous and the lyrics paint bizarre and disturbing pictures. The song ‘Pact Of Cum’, about perverse sexual bonding with a female partner, is unrelenting in its repulsive images, and ‘The God’s Faeces’ though it seems to speak for itself is actually more of a philosophical declaration of might rather than a blasphemous attack, although there is plenty of that on this album as well. My favorite is ‘Satanic Terrorism’, a fast, menacing and riff heavy song. A close second is ‘Anal Vomit’, a totally harsh and black hearted retching song. But if you were, at any point, lost as to what this album’s all about, look no further than the title track. Read that and you’ll never wonder what Antichrist is talking about. "I hate the past, I hate the present, I hate the future, I hate cars." That’s right, take your cars and shove ’em, we don’t like them! SARCÓFAGO doesn’t like much. There is not a song on this album that doesn’t have a killer riff and a crushing, aggressive sound. Listen to ‘Rhabdovirus (The Pitbull’s Curse)’ and tell me that isn’t a dirge of a riff. The drum machine may be particularly irritating in this song but you can get past it in other songs. I love this record despite its one major flaw. Expect nothing but total SARCÓFAGO on this one. www.facebook.com/sarcofagobr, www.greyhazerecords.com