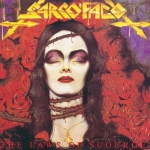 Probably none of the regulars visiting this site is not familiar with Brazil’s legendary SARCÓFAGO, whose early demos and classic releases “I.N.R.I.”, “Rotting”, and “The Laws Of Scourge” are still considered mandatory pieces of South American sonic barbarity. Greyhaze Records from the States now offer official CD and vinyl reissues of the complete SARCOFAGO catalogue, nicely packaged and skillfully remastered. From the blasphemous, primal fury of the quintessential “I.N.R.I.” (1987) over “Rotting” (1989) to “The Laws Of Scourge”, originally released in ’91, SARCOFAGO developed further musically and production-wise, sounding less barbaric and more polished on this record yet retaining a vicious intensity that still deserves nothing but utter worship. While “I.N.R.I.” was the ultimate radical and rigorous attack, songs like ‘Piercing’, ‘Screeches From The Silence’ or ‘Secrets Of A Window’ were like Tech Death compared to the bestial Black Metal of the debut. Nonetheless, “Laws…” has a sinister vibe that remains truly irresistible and hopefully a new legion of underground maniacs picks up such essential titles since all your NecroGoatBlasphemyPlusX started with these lads. Even when they tried creating “music” instead of just warfare noise, SARCÓFAGO were an aggressive and malevolent beast equally influential as the country’s #1 Metal act SEPULTURA. Listen to the entire album here. Buy your copy at: http://store.greyhazerecords.com. More about SARCÓFAGO at www.facebook.com/sarcofagobr