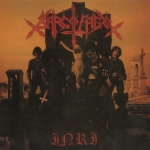 I have always wondered why this album get so overlooked through all the history. Maybe it is because back in the day, it didn’t have a proper distribution and the band itself never cared about playing live. Thing is that, this is one of the most important Black Metal albums of all time, period. This band didn’t need anything like north winds or freezing cold winter to look up for inspiration. They had a way more real atmosphere to get their influence from, like violent streets from Belo Horizonte in Brazil. Even the legendary late Euronymous from MAYHEM was quoted several times paying tribute to them. "I.N.R.I." is without a doubt one of the most violent and disrespectful albums ever recorded, especially if you’re a Christian, only BLASPHEMY and BEHERIT could compete with them back them, however, SARCÓFAGO was different when it comes to songwriting. It could easily blow your brains with tracks like ‘Satanic Lust’, ‘Christ Death’ due their fast tempo but it also can create a dark and eerie atmosphere with the now revered ‘Nightmare’, not to mention their imposing image. This album has been reissued several times, but nobody would complain about it that’s for sure. As usual, this version will contain a few goodies, like the classic tracks taken from the excellent (and also reissued) "Warfare Noise Vol. I" compilation, especially one of my favorite SARCÓFAGO tracks ‘Black Vomit’. And to finish off the album you will also listen to live versions of ‘Nightmare’, ‘The Black Vomit’ and ‘Sathanas’. At this very moment it would be a shame if you don’t have or at least listened to this piece of disturbing art, and now you have another chance. Don’t waste it. www.facebook.com/sarcofagobr, www.greyhazerecords.com 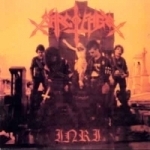 Now this brings back memories. It must have been late ’89 or so, and I had been reading all sorts of rave reviews and outlandish interviews with Brazil’s most despicable blasphemers, and I thought I should hear for myself what all the shrieks of derision and terror were about. I have to say not even I was quite prepared for what came slashing from the speakers that fateful evening. Anyone who knows me knows of my undying allegiance to BATHORY and SODOM, and if there has ever been a worthy successor to "In The Sign Of Evil", "I.N.R.I." is it. Simple riffs (à la Grave Violator) and satanic lyrics so badly written (not to mention hysterically funny) that I doubt God himself has stopped laughing yet, combined with BATHORY-ish drumming and the tortured cries and echoed howls of Wagner Antichrist make for a brimstone pinnacle of Death Metal that I don’t believe can be topped. This is one of those proverbial ‘ultimate’ releases the true underground will never allow to fade. And so here we are in 2004, some seventeen years after its initial release, and N.W.N. has paid tribute to SARCÓFAGO’s infernal genius with the mother of all re-releases. The album is a picture disc featuring the photo from the Cogumelo CD (the original album cover you’ll remember was a different picture and had more of a yellowish-red tinted effect to it), with a vintage photo of the ‘Insulters of Christ’ on the reverse, standing in front of their favorite sepulcher in the gloaming, and blaspheming to their painted black hearts’ content. In addition to the original LP tracks, the disc includes the abominable classics ‘Recrucify’, ‘The Black Vomit’ and the Warfare Noise I compilation track ‘Satanas’. The entire package includes a massive twenty-page booklet FILLED with vintage photos (B&W and color), fanzine interviews, a short bio, and a centerfold size color poster. The ultimate tribute to one of Death Metal’s undisputed ultimate albums. Email: nuclearwarnow_prod@yahoo.com