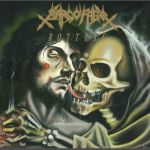 The general consensus among us connaisseurs of extreme Metal is that "INRI", that genre defining beast of an album, is SARCÓFAGO’s finest hours. While this is a universal truth, like, say, that everything is better with bacon, "Rotting" always gets shamefully overlooked – for many reasons. First of all, it’s fucking impossible to outshine, outsmart and outmetal "INRI". It’s perfect as it is, in all its over the top Satanic sloppiness and youthful perversion. But maybe even more important than this are more simple factors: it was released in 1989, the year of "Realm Of Chaos", of "Symphonies Of Sickness", "Slowly We Rot", "World Downfall" and above all the towering monolith that is "Altars Of Madness". It was those bands that appeared in all the magazines, not some sexually depraved teenage alcoholics from the favelas of Belo Horizonte. No matter how hard they thrashed or how fast the drums were beaten to a bloody pulp, there was no word on the street about SARCÓFAGO. Only those who knew, knew – trading tapes and stories like ancient occult wisdom. Well, that was exaggerated, but it’s not far from the truth: revisiting the record again now, it’s cleaner and more polished in sound than "INRI", but shit, it’s heavy and brutal as fuck and dark as my morning coffee. SARCÓFAGO paved the way for some of their contemporaries towards a new dark age of dogma and ideology with relentless brutality and blasphemy, youthful naivety and an utter dedication to all things evil and fucked up, and "Rotting" spectacularly proves my point. Something that I never understood was that their fellow countrymen SEPULTURA always seemed to get a free pass for their stylistical change over the years and SARCÓFAGO never did, even though "Rotting" is much closer to "INRI" than "Beneath The Remains" is to "Bestial Devastation". It’s a strange and unjust world, but this world was being made more bearable thanks to the sounds of sheer insanity, bloodlust and disgust created by four hoodlums from Brazil. I could go on and on and bore you, the reader, and myself with details such as comparing the 1989 version of ‘Nightmare’ to the one recorded 2 years prior, but hey… this should be considered common knowledge for everyone who ever sewed a patch on a vest. I’d rather think of where I’ll get those immortal lines tattooed: "I’m living in sin and it’s a hard way of life / But in sex, drinks & metal I will die!!!!!!!!" (this digipak re-issue comes with an additional, approximately 30 minutes long, live bonus DVD that features a SARCÓFAGO live show from1991 in Belo Horizonte when the band supported MORBID ANGEL – tracklist: ‘Alcoholic Coma’, ‘Satanic Lust’, ‘Rotting’, ‘Satanas’ and ‘Nightmare’. Since it was originally poorly recorded on VHS and never intended to be released on a DVD 25+ years later it is of course of the typical bootleg quality, but it showcases the energy of those days pretty good nevertheless. It’s raw and highly aggressive, just as it’s supposed to be, and the fact that it was filmed directly on stage captures a lot of cool historical memories of that particular night. – Frank). For more info and ordering information check out www.greyhazerecords.com 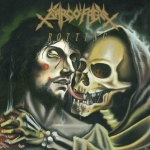 Sometimes good things happen! For example: the Brazilian pioneering Metal label Cogumelo has now an official licensee from the USA. Greyhaze are here to bring back the world the old Brazilian Metal heroes. And as a start, they re-released all the stuff from Belo Horizontes overlooked Black Thrash monsters SARCÓFAGO. Well, to stay true to the facts – Black Thrash monsters might only fit for the first two albums of SARCÓFAGO, since the band somehow matured in the 1990s. And if I say matured, I mean became lame and boring. Nevertheless, the first two SARCÓFAGO albums “I.N.R.I.” and “Rotting” are still classic stuff worth checking out for those who like their Metal black, raw and brutal. “Rotting” was the first album that was easily available outside Brazil, thanks to a deal with Under One Flag. Although it never really kept up with the sheer rude and aggressive power of the debut, “Rotting” still is a fine album that showed a more diversified, sometimes even epic and dark side of SARCÓFAGO. They put a stress on more complex songwriting, that runs out of hand in the one or other moment. ‘Tracy’ might serve as an example for that, since the middle part quotes a lot of ideas from international Thrash Metal and therefore comes along a little bit constructed here. On the other hand we have the rabid, six-minute long ‘Alcoholic Coma’, whose break with the sound of the respirator comes in the nick of time. The dark and sweeping title track that summons the devil and the carefully re-recorded song ‘Nightmare’ keep up the tradition and the spirit of “I.N.R.I.”. Only ‘Sex, Drinks & Metal’, placed in between the two aforementioned songs, is a little more straight. So, even though it already lacks a little bit of the lyrical blackness, “Rotting” is a good choice for those into the old brutal stuff. Definitely worth checking out at www.facebook.com/sarcofagobr or www.greyhazerecords.com