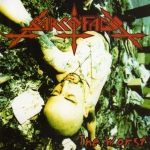 This seems to be the album almost unanimously brushed aside for SARCÓFAGO, and it was the last full length they recorded. At first it seems the album is off to an alright start with the title track, ‘The Worst’. Although again using a drum machine as with the previous album, ‘Hate’, when programmed well drum machines are tolerable though never an entirely welcome presence and this album is no different. On top of that, the riffs vary from good to bad, making the experience of listening to it like rooting for a losing team. You want them to succeed but they fall short. Thematically there’s everything SARCÓFAGO about this: mental disturbance, sex, perversion, Satanism, etc. So, there’s that to appreciate. However, the songs feel lazily made. I find myself waiting for the next good part and tolerating the tedious ones. ‘God Bless The Whores’, for instance is a fitting name for a SARCÓFAGO song, but the song itself is over 7 minutes long. That’s an absurdly long time for a song that has practically one CELTIC FROST inspired riff over and over. Then there’s a song like ‘Plunged In Blood’, half great, half boneheaded groove Thrash. But the worst (get it?) thing on this album is the re-recording of ‘Satanic Lust’, which appeared on "I.N.R.I." in 1987. It was the title of the first SARCÓFAGO demo as well. So to hear it re-made with a computerized sound for no great reason is tough to stomach. Perhaps the most hilarious moment on the album is in ‘Shave Your Heads’, an anti-drug and party song. "Tattooing your ass will not make you Batman!", Wagner reminds us. Remember that lesson! This also came with "Crust" the final recording by SARCÓFAGO, originally released in 2000 (and featured on here as bonus tracks). It immediately stands out as better than "The Worst". The band seems to have regained their footing, writing some worthy riffs with some hideous sounding vocals. The drums could be a little lower but otherwise this is hateful stuff, ‘Fuck Off The Melodic Black Metal’, neatly summarizing the mission statement and pointing the finger at bands like CRADLE OF FILTH, DIMMU BORGIR, KOVENANT, and TIAMAT. The title track ‘Crust’ finishes off this EP, last of the SARCÓFAGO records. It’s a better way to say farewell than with a full length like "The Worst". I’m sorry but I can’t find much to like about it except that "Crust" is included. www.facebook.com/sarcofagobr, www.greyhazerecords.com