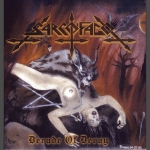 It’s more than 30 years ago, 1984 to be precise, that a bunch of real teenagers in Belo Horizonte in Brazil started to make some noise that was influenced by all extreme music of the time, be it Black Metal, Thrash Metal or rude Hardcore Punk. These kids called their band SEPULTURA. The singer of this wild horde was a 14 year old guy named Wagner Lamounier, who chose the stage name “Antichrist”. He stayed only one year in that later to be famous band without having recorded anything with them. After that, he teamed up with bass player Gerald Minelli, who chose “Incubus” as stage name, and some other, often changing, people to form a band of his own. The result was called SARCÓFAGO and, as we all know, never became as famous as SEPULTURA. Yet, this band made an important contribution to extreme Metal with their unpolished and ultra brutal debut album "I.N.R.I.". The 10th anniversary of the band was a good reason for the band and their label Cogumelo Records to release a compilation with some of the stuff SARCÓFAGO did until that day. Under the fitting title “Decade Of Decay”, we find twenty songs that give a good look on the music of SARCÓFAGO, in a reversed order. After the exclusive intro ‘The Lost Of Innocence’, we have four songs from the album "Hate" from 1994. And these songs show a band that not only completely matured from their chaotic days of youth, but also tried to sound a little more modern. So the riffing was more grooving and the songwriting less pointed, while the title track even showed contemporary Hardcore influences. But it’s not just these modern ingredients that make these songs hard to bear nowadays – it’s the absolutely awful clinical drum machine that destroys all the good approaches. The four following songs were taken from the "The Laws Of Scourge" album, originally released in 1991 accompanied by the “Crush, Kill, Destroy” EP that featured the CD bonus tracks. Here SARCÓFAGO were pretty much focused on traditional Thrash typical for the end of the 1980s, but without too much identity. Songs like ‘Screeches From The Silence’ were too random to really leave an impression. Just four years after "I.N.R.I.", not much was left from this refreshing bunch of kids making noise. Only ‘Crush, Kill, Destroy’ showed some hints on the glorious past. Growing up does also sometimes mean becoming boring… Thankfully the second half of the album shows why SARCÓFAGO enjoy a certain cult status. Only two tracks from the album "Rotting" (1989) here, but the still rather fresh sounding rawness of these two rather long songs is a real kick in the ass compared to the later stuff we had to deal with before. ‘Nightmare’ is a re-recorded older song from “I.N.R.I.”, a slowly crunching track with fast outbreaks. And the title track is a blasphemous slower epic, summoning Satan in its course. But be these two as good as they are – "I.N.R.I." is the real hot shit! An album that was kicking asses when it was released in 1987, yet the bigger mags didn’t realize the vigor of this album. Instead SARCÓFAGO and other bands from Brazil were depicted as noisy exotics, who just copied VENOM or HELLHAMMER. How wrong were they… Sad enough, there are just two songs from “I.N.R.I.” on “Decades Of Decay”, the overkilling title track that early DESTRUCTION would have been proud of, and ‘Desecration Of Virgin’ with some of the first Goregrind vocals ever. But that’s not too much a pity, since there are some real gems left. No less than seven demo recordings, who were recorded again for later albums (except for one intro piece), make this album a compilation even worthy for fans of SARCÓFAGO. And the sound of these recordings is amazingly good, carefully restored original recordings which still sound very authentic. Thus it’s a real joy to listen to the original versions of classics like ‘Satanic Lust’, ‘Christ’s Death’ or ‘Third Slaughter’, which later was released as ‘The Last Slaughter’ in an extended version. So, since Greyhaze Records just re-released all SARCÓFAGO albums, “Decade Of Decay” is the best opportunity for newbies to get an overview of their works. Check: www.facebook.com/sarcofagobr or www.greyhazerecords.com