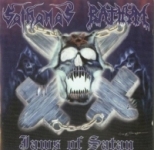 Arrrgh, this is excellent! Even though there’s already thousands of brutal releases out there I’m still pretty excited when some of classic stuff gets re-issued these days. And this SATHANAS / BATHYM disk certainly is a REAL classic! Pittsburgh’s SATHANAS came up with a couple of quite good albums after their reunion lately, but to me they unfortunately never ever managed to recapture the overall rather evil atmosphere of their classic 1988 demo "Ripping Evil" (which later also got re-released as a 7"). The four featured tracks ‘Jaws Of Satan’, ‘Blood Sacrifice’, ‘Sathanas’ and ‘Hail Lucifer’ still had a very strange production, but maybe it was exactly that in combination with Mike Smith’s outstanding and totally possessed sounding kinda vocal delivery and the simple, yet very crushing guitar work of Paul Tucker and Brian Axtell which turned these tunes into alltime favorites for many die hard underground maniacs. The music is very much in the old school Death / Thrash vein, but the whole atmosphere which surrounds them is still a lot more devilish than 99% of today’s Black Metal stuff. Unfortunately vocalist Mike Smith left the band in 1989 in order to join ACHERON (he can be heard on their classic demo material, which has also been re-issued through Full Moon Productions lately, entitled "Compendium Diablerie") and shortly after SATHANAS fell apart for quite a while. Drummer Bill Smiley and guitarist Paul Tucker (who took over the vocal duties from now on as well) went on with different members under the BATHYM moniker and released the "Into Darkness" demo in 1990 and the "Demonic Force" 7"EP in 1991. Musically this was basically in the good old SATHANAS style, but I personally think that Paul’s vocals never really reached the class of Mike’s (even though Paul did a pretty good job on the "Demonic Force" EP). But anyway, this compilation CD is a brilliant one, not only essential for all those of you who experienced those good old days, but also for everyone else who’s interested in extreme classic old school stuff. Apart from the already mentioned SATHANAS and BATHYM demos and the 7", there’s furthermore quite good sounding live and rehearsal recordings of both bands on the disk. And the packaging was done with lots of dedication as well. Old pictures, demo and 7" covers, all lyrics and the whole band history complete a release which you shouldn’t miss out on. For further info (also on other From Beyond titles) check out their website: http://www.displeasedrecords.nl/frombeyond/index.php