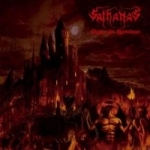 It’s always nice to hear from old bands. SATHANAS are an American band who have remained more or less consistent in output since 1988. That’s an achievement worthy of note; for any band. Also worth noting is their complete lack of shame in displaying their influences: SLAYER (who isn’t influenced by them), SODOM (they even scream "In the Sign of Evil" on the first track), VOIVOD, every other band of the 80s you can think of, and the American Black Metal scene. The latter influence is observable in the vocal work, which sounds more like ABSU or BLOOD STORM than any European band. SATHANAS tend to shift styles slightly; going from Death to Thrash, to Black, and back again. This makes it hard to pin down within any one genre, which is fine since we shouldn’t really be categorizing like that anyway. The album was recorded with an obviously digital production but, strangely, the songwriting is so old school, it doesn’t bring it down terribly. It may even grow on you after a few listens. In any event, its remarkable that SATHANAS can still write like this after 21 years. www.sathanas.net