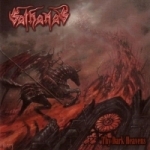 If you are interested in powerful produced, direct and dark Black / Death Metal, be sure to get this album!!! SATHANAS, a legendary cult-horde from the US (if you like to know more about them, have a look at the interview with SATHANAS main-man Paul Tucker in our “interview” section), unleash their third official full-length assault with “Thy Dark Heavens” and the album is their most elaborate and varied yet. “Armies Of Charon” was a bit more raw and primitive, but slightly monotonous compared to the new CD. Acoustic guitar intros, more inventive riffing and some growls here and there spiced the whole thing positively up. The eight songs are dominated by traditional, heavy mid-tempo riffing, hateful screams that remind me a bit of LORD BELIAL and some memorable hooks. SATHANAS are a nice exception to those Black / Death acts that either concentrate on Thrash riffs or the typical Scandinavian stuff and “Thy Dark Heavens” is certainly worth buying. My personal highlights are ‘Curse Your Saviour’, the opener ‘Winged Black Spirit’ and the 7 minutes epic ‘Queen Of The Netherworld’, which starts off with an atmospheric acoustic guitar intro and then turns heavy as fuck! Well, check it out!!! What’s also nice, is the great Kris Verwimp coverart, although many people say he does too many artworks, I like his stuff and the one on “Thy Dark Heavens” simply looks fantastic, although it reminds me a bit of Joe Petagno. Anyway, get this CD! And before I forget it, a new album by SATHANAS comes in 2003 on Agonia Productions – it is called “Hex Nefarious”. Label’s website: www.blackmetal.com