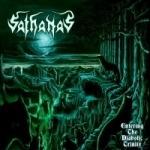 First listening to this output, I thought "Well, they sound pretty old school", but then I realized SATHANAS being active in the Metal scene since 1988, so they not just sound old school, in fact they are old school! "Entering The Diabolic Trinity" offers you nine songs (plus intro) of pure Black Metal. I am not talking of the second wave of Black Metal that was started up in the early nineties in Norway by DARKTHRONE, EMPEROR etc., but more of the old school eighties Black / Thrash Metal like early SODOM, BATHORY or HELLHAMMER. On this album no cliché is missing. The band name, the album title, song titles like ‘Demonized’, ‘In The Circle Of Hell’ or ‘Triumph Of Darkness’. An intro, where howling wolves can be heard, the whole output is breathing the ancient spirit. Musically the songs are mainly mid-tempo based, with vocals that are somewhere between shrieking and grunting. The guitar-riffs can be described as catchy and melodic, yet dark and raw. The production is either a reminiscence of the old eighties or maybe they did not find any better studio and / or producer. But be it on purpose or not, the uncooked, brute sound is the exact the way such albums should sound. To make this old school attack complete, the German label Iron Pegasus (referring to the band’s homepage) is planning to release this fine piece of old school Black Metal on vinyl… of course limited to 666 copies. www.sathanas.net