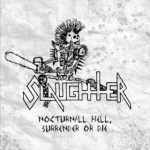 What we have here is a collection of stuff by legendary Canuck Thrashers SLAUGHTER: the "Nocturnal Hell" EP from 1986 and the "Surrender Or Die" demo from the year before – in reverse chronological order here, which is more than a bit weird… to put it mildly. Anyway, "Nocturnal Hell" is the least re-issued (read: bootlegged) of all SLAUGHTER releases, and it’s obvious why: two out of three songs also appear on their "Strappado" album that came out a year later. The only non-album tune (‘One Foot In The Grave’) was on the demo and sounds just like an outtake: same speed, same ferocity, same brutality, in a bit over a minute. And then, "Surrender Or Die" in all its glory: a masterpiece of Metal, bridging the gap between Thrash and Death Metal at a time when most bands played it safe. OK, "Seven Churches" was out already and so was "In The Sign Of Evil", but SLAUGHTER outthrashed them all. They only knew two speeds (fast and faster, and even when they’re mid paced, it feels fast) and they kicked out their jams with a rage that was unmatched. The sound is fucking terrible, but there is no other way. Ugly music needs ugly sound and the older I get, the more appealing this is to me. And in all honesty, this is what makes or breaks a good song: it has to sound just as good in multimillion dollar studio as it would on a damaged tape. And damn sure, SLAUGHTER always sound amazing. Their chainsaw guitars, their Punk snottiness in the vocals, their over the top lyrics… this is the stuff that "Neo Thrash" bands took and ran, but never, ever even came close. Not once. But let me get out my spiked baseball bat and bash some heads in nonetheless… why the fuck did the label leave out the HELLHAMMER cover (‘Massacra’) here?! Not only is it essential for understanding what this band is and why they are that way, it’s an integral part of this demo. So: music good, release bad. Try to find another version and thank me later. AND MAKE WAY FOR THE INCINERATORRRRR!!!!!!!!!!! www.vicrecords.com is the label, www.facebook.com/slaughter-canada-12169425739 is the band.