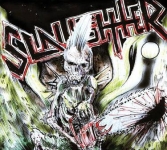 SLAUGHTER
One Foot In The Grave
(Terror From Hell Records)
62:39min

Canadian underground Death / Thrash Metal titans SLAUGHTER never really made it big for themselves but instead it’s no denying that they did have a remarkable influence on the underground Death Metal scene movement back in the day – and as it seems SLAUGHTER are not completely forgotten these days either. I mean, everything that the Canadian SLAUGHTER got captured on a tape when they still existed, has been released in one format or the other. "One Foot In The Grave" is such a collection, containing of SLAUGHTER’s early material that has already seen the light of day at least once or twice on some other releases. Of course the very highlight of this compilation album of SLAUGHTER’s stuff is a 12-song rehearsal tape that was recorded together with ‘Evil’ Chuck Schuldiner on January 13th, 1986 (also getting a vinyl and CD release on Hell’s Headbangers in 2004, titled as "Fuck Of Death"). One can hear from everything while the guys indeed had some good time together, they also managed to create a bunch of immortal underground classic songs together in January 1986. Included are also SLAUGHTER’s 3-song "Nocturnal Hell" 1986 7-inch EP, the 5-song "Bloody Karnage" 1984 demo and a track called ‘F.O.D.’ that this Italian Terror From Hell Records previously put out in 2010 as a limited tape. Included are also the short liner notes by Dave Hewson of SLAUGHTER but I have no idea whether they have been written for this particular release only, or are the same liner notes already appeared on some other SLAUGHTER compilation(-s) before this? (they are actually the same as in the "Fuck Of Death" release, just shortened for reasons beyond my knowledge – Frank) Nevertheless I really don’t see much point for this type of release unless you are a die-hard collector of Canadian underground legends SLAUGHTER. The only definite SLAUGHTER collection for me personally is a 4-CD box set titled "Tortured Souls", released on Brazilian Marquee Records back in 2007, containing of nearly 5 hours of SLAUGHTER stuff. But then again, I am not one to blame any true die-hard fans of the band either. "One Foot In The Grave" is a professionally done digipak-CD, limited strictly to 666 copies only. So if you feel like investing some of your hard-earned money into this, then by all means feel free to do so. These legendary Canadian Deathrashers can be found at: www.facebook.com/pages/slaughter-canada/12169425739, label: www.elektroplasmamusik.eu