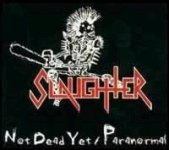 SLAUGHTER’s debut “Strappado” is still a fuckin’ masterpiece, no matter how sloppy the raw, intense and straight into your face material was partly performed. Let’s face the facts: up till now nobody ever really managed to reproduce the chainsaw-like guitar sound, not even the guys themselves. And that is one big problem with all of the stuff they put out afterwards, including the two releases that got combined for this digipak CD re-issue (1991’s “Not Dead Yet” and 1988’s “Paranormal”). It may sound a little silly, but SLAUGHTER simply became too Metal orientated and controlled in their past “Strappado” songwriting. “Not Dead Yet” and “Paranormal” both certainly have their moments, but are mainly too controlled and therefore are lacking in the old intensity. While SLAUGHTER were quite obviously influenced a lot by Punk and Hardcore in the beginning, this material here partly even brings old METALLICA to mind (just listen to the riffing and songstructure of the instrumental ‘Death Comes Ripping Through You’). Of course SLAUGHTER were still much more rough sounding than the Bay Area four-piece, but never to the extend as they originally used to be. I’m still glad though that this material is finally available (again) and therefore easier accessible than through obscure tape trading channels. But I personally would’ve prefered to see the entire “Paranormal” release featured (only four out of nine songs made it on here – probably due to the fact that the remaining tracks were also on “Strappado” in re-recorded versions), but four additional SLAUGHTER classics in live versions make up for that, so… The sound quality varies from quite good (“Not Dead Yet”) to still ok (“Paranormal” – even though the ending of ‘Schizo’ obviously was damaged somehow) and for die hard fans exclusively (the live stuff). If you haven’t heard anything by SLAUGHTER before, you better pick up “Strappado” though (which has also been re-released with additional bonus material).