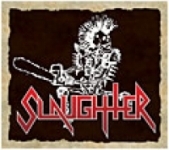 This is truely a feast for every fan of Canada’s legendary 80s Death / Thrashers SLAUGHTER: almost 5 hours (!!) of music, delivered in a fancy styled boxset, that contains two crammed double-CD sets, a poster and three stickers. Both CDs furthermore come with a 16-pages fat booklet each that include tons of vintage pics of the band (never seen most of them myself before!), a biography, lyrics, demo covers, old gig flyers (all in set 1) and even more pics plus the in-depth Voices From The Darkside interview with original members Dave Hewson and Terry Sadler, courtesy of Laurent Ramadier and yours truly (in set 2). Full coloured artwork, in the true old school SLAUGHTER style, had exclusively been made for both CD covers (and was also used for two of the stickers as well), while on the musical side of things the whole release is the perfect addition to 2001’s "Strappado" and "Not Dead Yet / Paranormal" digipak re-releases from Nuclear Blast. In other words, even if you missed out on the original Fringe Records "Strappado" CD (from 1987) and "Surrender Or Die" demo CD on Utopian Vision Music (from 2000), you can still complete your SLAUGHTER collection simply by going for the aforementioned digipaks and this boxset as all three items combined have almost all material on offer that the band ever recorded (the classic "Fuck Of Death" rehearsal with DEATH’s Chuck Schuldiner was re-released by Hells Headbangers Records not too long ago). So, what kind of material does this boxset here has on offer in detail then? Well, first of all you’ll get all of the band’s early demos – from 1984’s "Meatcleaver" 10-song tape (quite frankly, I never heard that before), to their most popular releases "Bloody Karnage" and "Surrender Or Die" (from 1984 and ’85 respectively) up to 1988’s 3-tracker "The Dark". In addition to that there’s cool rehearsals from ’85 and ’86, live shows from 1985, 1987, 1988 and 1989 (the last one being my favorite here!) plus 1992’s "Fatal Judgement" album that was already recorded under the STRAPPADO moniker, but never officially released before. Among the ten songs on the album you’ll also discover re-recorded versions of the three SLAUGHTER classics ‘F.O.D. (Fuck Of Death)’, ‘Nocturnal Hell’ and ‘The Curse’. Listening to all this (again) after so many year turned into a great nostalgic trip for me, that brought back a lot of good memories and obviously left not much room for criticism. Yet there’s one little complain of mine that is addressed to the quality of the box itself… In my humble opinion it should have been manufactured a little more solid… and using a different (better readable) font type on the boxes backside would’ve made the whole thing 100% perfect. But hey, this is really nothing major, so if you’re a die hard SLAUGHTER maniac, you probably couldn’t care less and already considered ordering your personal copy anyway. But don’t wait too long – it’s strictly limited to 1.100 hand numbered copies, so hurry up! Label contact: www.marquee.com.br