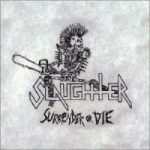 If you’re mixing these guys up with the rather stupid American Hardrock act of the same name, you’re definitely lost and should immediately start your history lesson in brutal music from zero again! This Canadian three piece used to be around in the mid eighties, released two demos (“Bloody Karnage” and “Surrender Or Die”), a 7″EP (“Nocturnal Hell”) and a full length album (“Strappado”) until they unfortunately disappeared into nothingness again. SLAUGHTER was a totally unique act that musically somehow emerged out of the Punk / Hardcore underground, but pretty quickly evolved into an incredibly raw Metal act with additional influences from HELLHAMMER / early CELTIC FROST. No other band around could be compared to SLAUGHTER and no other band had this over the top raw and dirty guitar sound. Plus, their influences on the next generation of bands was just incredible. NAPALM DEATH and WARHAMMER are even playing covers of “Incinerator” and “Tales Of The Macabre” nowadays. Well, as you probably have guessed by the title of this CD already, this is the (official!) re-issue of their classic second demo from 1985. Almost all thirteen featured songs were re-recorded for the album / EP later on, except for “Shadow Of Death”, “Surrender Or Die”, “Eve Of Darkness”, “Cult Of The Dead” and the HELLHAMMER cover “Massacra”, so at least five more reasons to go for this release as well. The packaging is pretty cool (with a bunch of vintage pics and all the lyrics included) and the sound quality way better than all the third and fourth generation tape copies that are circulating of this stuff. This is the real deal and if you’re into the originators of our beloved scene, make sure to order yourself a copy straight away. Contact: UTOPIAN VISION MUSIC, P.O. Box 22069, 45 Overlea Blvd., Toronto, Ontario M4H 1N9, Canada, E-Mail: metal@total.net