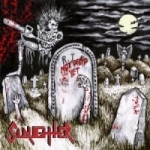 SLAUGHTER’s problem after the release of “Strappado” in 1987 was not only to record an equivalent or even better successor, they had to deal with problems regarding their name, too. Therefore this 8-song demo was originally released under the monicker STRAPPADO instead of SLAUGHTER. From my point of view this name change is, with a distance – guys, I was 12 years old in 1987 when “Strappado” was released, and even if I probably started listening to my first Metal erruptions at this age, “Strappado” was not my first choice and came later when my interest in the world wide Death Metal underground already was active – this new name was a good option. Musically spoken, as “Not Dead Yet” is not SLAUGHTER as you know them from “Strappado”. It’s still Thrash Metal, well-played (even better played than on “Strappado”, if you’ll be honest) and with great riffs. Nevertheless, gone is the unbelievable outstanding and crushing guitar sound and the raw feeling of this classic. The mix between POSSESSED and CELTIC FROST to a more regular Thrash Metal version with hints of METALLICA and slower DARK ANGEL is obvious here and suits them well, the difference on the other hand is magnificent. My honest opinion is that “Strappado” is by far SLAUGHTER’s lifework and their shining star, but “Not Dead Yet” is a cool album, too, which I prefer to listen to more as to any album of a newcomer of the current Thrash Metal revival. That’s the reason why I deeply recommend this limited vinyl edition of this recording from High Roller Records. The layout is again great and could only be better if we had a gatefold sleeve. The only little thing left to complain is the playing time of this album as it only features the “Not Dead Yet” release. The 2001 CD re-release through Nuclear Blast Records featured next to those 8 songs the “Paranormal” demo from 1988 and a few live tracks as well which would fit this release good, too. At the end you get the 1990 “Strappado” cassette in a remastered version on vinyl of 666 copies (100 in red / white vinyl, 166 in red / white / black splatter vinyl and 400 on black vinyl). This will be a collector’s item soon, so be fast. Available from High Roller Records (www.hrrecords.de).