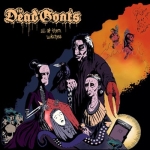 THE DEAD GOATS
All Of Them Witches
(Testimony Records)
43:32min

The revival of the SweDeath sound seems to be destined to immortality. To play this style of Death Metal is just attitude and passion when you got the brillance of what ENTOMBED, CARNAGE, DISMEMBER (keep the list as long as you want) did in the late 80s / early 90s. Originality is not really important, whatever is your role in the scene, if musician, label owner, fanzine editor or simply fan. You do it just because you like it. THE DEAD GOATS, from Bialystok, Poland, are an example of this way of seeing the matter. They were born from a part of the ironic Grindcore band NEUROPHATIA in 2011, in detail the bassist Marcin Jaworski and the drummer Radoslaw Pierściński (also ex – SQUASH BOWELS), joined by the guitarist / singer Paweł Bartulewicz. They didn’t shoot the shit, and after the release of the first full-length, "Path Of The Goat", in 2012, they continued to compose material and release EPs and splits year after year. "All Of Them Witches" is the second main effort, repayed by the attention of the newborn German label Testimony Records. It’s composed by an instrumental introduction and eight songs of pure Swedish Death Metal with strong Crust / d-beat influences. A minute description would be hard and maybe useless, not for their fault but because the level of the whole album is unvarying and medium-high. However, ‘Dwarves In My Coffin’ and ‘Into The Fiery Grave’ are probably my favorite tracks here. I have to tell you, horror maniacs over there, that they also tribute the evergreen Lucio Fulci’s ‘Zombie’ theme on the final song, ‘The Gloom That Came To Salem’. This band is able to build songs with some very good riffs and they got the climax when there is a perfect balance between aggressive and melodic parts, with the ivenitable chainsaw guitar sound of the BOSS HM-2. The Pierściński’s drumming is the real driving force of the fastest songs, he knows how to perform a perfect hammering skank beat! Moreover, he got also a great snare drum sound, one of the strong points on this production. So, don’t except nothing different than Swedish Death Metal the way it has to be, not a masterpiece or a new fundamental chapter of the genre, but a good album for fans of classic bands like NIHILIST, GODDEFIED, NIRVANA 2002, INTERMENT, or younger acts like NOMINON, BASTARD PRIEST, UNDER THE CHUCH, BASTARD GRAVE, REVEL IN FLESH, MAIM, ERODED (ITA) and so on. More information at www.facebook.com/thedeadgoats, https://thedeadgoats.bandcamp.com, www.facebook.com/testimonyrecords