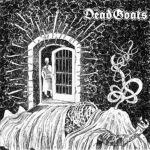 Is it just me, or does a name like THE DEAD GOATS somehow hint on a Horrorpunk band, MISFITS style? Anyway, this Polish three-piece is pretty far from playing Punk, let alone Horrorpunk. Instead Jawor, Pavlo aka Conan and Radek Royale chose to play some real Metal of Death, that is "hugely inspired by Swedish 90’s scene", to quote their Facebook site. And, yes, the three songs on "Ferox" can hardly deny this influence. They don’t even try it! And that’s fine with me. Even though THE DEAD GOATS already released an album ("Path Of The Goat", 2012) and an EP ("Children Of The Fungus", 2013), they decided to record a demo with three new songs. Just because they felt it was a mistake not to record and release a demo. Pretty underground kind of thinking, isn’t it? Those three songs are really fine stuff for all those who love the old style of Death Metal. A movie sample (don’t know which one though) opens up for ‘Final Death’, a song whose riffs immediately made me think of old DISMEMBER. Next we have ‘Bonesover’, a very fast and rabid song which would have fitted any Swedish classic Death Metal album. I love the crunching middle part, that made me bang my head and shake my fist. Another (yet again unknown) movie sample opens up ‘Into The Haven’, a slowly grinding and grooving killer of a song, that speeds up in the middle and delivers some vocals close to Black Metal. Probably my fave on this very very fine demo. Of course these three songs will not revolutionize our Metal world. But they are honest and give great pleasure. If you want your Metal of Death played with passion and fury, you should immediately listen to THE DEAD GOATS and "Ferox! It is available on CD-R, limited to 300 copies, and comes with a xeroxed cover (artwork by Robert A. von Ritter) and a sticker. Check out the band and contact them at: www.facebook.com/thedeadgoats