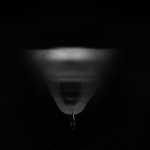 THORNESBREED from the eastern part of Germany are already active for nearly two decades, but are only releasing their second full-length now. The band plays a Black Metal painted version of Death Metal, moving within the borderline of both styles. Oppressive guitars and menacing atmospheres are their strength and the band manages to drag the listener into their dark hopeless world. Dark grunts, also with some caws and screams and blast-beats with an ever pounding double-bass, deliver the dark fundament, fulfilled with some really disturbing lead melodies and distorted guitars. The created atmosphere is so dark and daunting, that it is a while ago, that a band has caused that intense feelings in me. Maybe CORPSESSED managed that or early FORGOTTEN TOMB. Also carefully incorporated Doom Metal passages really make this album an intense and dark and alternating journey. The band skillfully combines their influences of Scandinavian Black Metal with raw Death Metal in the vein of the early 90s, when these styles were not divided so strictly. While the first part of the album is more Death Metal orientated but comes up with some really outstanding tracks like ‘Not A Second From Oceans To Frozen Wastelands’ or the fantastic ‘Abendwerk’, the band goes more into the Black Metal direction on the second half of the album, where ‘Dividua Anima Pt. I’ is a real jewel and shows once again the huge songwriting abilities of the band. Even though it is sad, that it might take another several years to hear the follow-up of this fine album, each track on this album shows, that every single tone has been created with a massive love for details and all arrangements have been precisely worked out with huge attention. Fans of intense and raw Death / Black Metal, which is not easy to digest, but worth to listen to very detailed, should check this fine output out. More band info at following locations: www.facebook.com/thornesbreed, www.art-of-propaganda.de