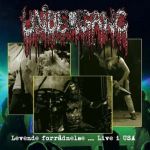 Finding a good Death Metal live album is a very rare thing. If I had to make a list of my favourite live albums in extreme Metal, I would say: "Live Corruption" by NAPALM DEATH, "Entangled In Chaos" by MORBID ANGEL, "When Satan Lives" by DEICIDE and "Live – Blasphemy In Brazil Tour 2001" by INCANTATION. In my opinion these four titles are the Death Metal answers to masterpieces such as "Decade Of Aggression" by SLAYER, "Mortal Way Of Live" by SODOM and "Live After Death" by IRON MAIDEN. I could also add to my list some Peel sessions, "Tribute To The Goat" by INCANTATION, "Live In Leipzig" by MAYHEM or "Live Ritual: Friday The 13th" by BLASPHEMY, but in these cases we’re exploring different territories: live in the studio recordings or raw Black Metal. This preamble gives you the idea of how hard it is to find a noteworthy live album in the Death Metal scene. However, not all is lost and "Levende Forrådnelse… Live I USA" from UNDERGANG is a ray of hope in a pretty poor catalogue of decent live releases in extreme Metal. Here we have eight songs and a DISGRACE cover for almost 39 minutes of old school Death Metal, recorded live at Tonic Lounge in Portland, Oregon, United States on July 27, 2017. As the band clearly admits in an official statement: "Some dubs and edits have been made in order to provide a better listening experience." So, what does it mean? It simply means that the original live recording was later edited and adjusted in a studio. Well, estabilished that "Levende Forrådnelse… Live I USA" is a sort of hybrid live album and not a pure one, it’s still a very enjoyable release. Each instrument is perfectly audible and even if this is a live recording partially dubbed, the result is killer and genuine with a very raw sound. Regarding the music, you know, UNDERGANG is one of the best bands of the new wave of old school Death Metal. They play a form of morbid and sick Death Metal in the vein of legendary names such as AUTOPSY, FUNEBRE, DEMILICH, GRAVE and early ENTOMBED. They’re not particularly fast, but not even a Doom band; there are some accelerations here and there and that’s for sure a good thing for my ears. One of the best things of UNDERGANG is their rotten and putrid vocals: gore-drenched ultra guttural growlings alternated with vomit-like screamings; something very reminiscent of early CARCASS, DEMILICH and IMPETIGO. The weakest point of this album? The cover artwork (it sucks). Anyway this is a recommended addition to your Death Metal collection. If you’re looking for a sick release with a live touch, get it, because the scene doesn’t offer much! More info at www.facebook.com/undergangktdm, www.darkdescentrecords.com