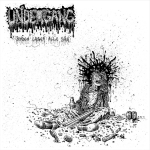 Take your guitar and tune it low, no lower, add some distortion, no I said add some distortion, make it noisy, make sound raw, make so low and distorted that the walls will rumble. Find your bass, same procedure thank you. Track down your drummer, slap him a bit around, turn him upside down, headphones on, and make that raw guitar track, turned up to max, shake him even further and then press record, as he starts to churn out wicked rhythm figures. Add some guttural noise and growls from below the grave and voila, you have a new output from UNDERGANG, the Danish Death Metal fiends, that have ripped a new a**hole in raw, noisy and brutal Death Metal. This new, third album, from the Danes has taken the brand of Death Metal they established with the two first outputs "Indhentet Af Døden" and "Til Døden Os Skiller", a tad further down misery lane, the brutality and nastiness is much more focused and precise, the sound sharper and to the point, it is hitting hard. "Døden Læger Alle Sår" is recorded in California at the Earhammer Studios where Greg Wilkinson is handling the knobs, and he knows his way around heavy sounds. He handles the bass quite well himself, and then he has recorded and engineered quite an array of heavy and noisy bands. The songwriting has also been taken a step up, not that the songs on the two first albums have been bad not at all, though everything just seem so much more focused on "Døden Læger Alle Sår", and even how brutal or raw it gets, either the guitar or the bass keep a main melody running, so you always know where you are, and the output is generally more varied. This together with the newest VASTUM release are serious contenders to the best album of the year title! Follow the art of molestation to your demise: http://undergang.bandcamp.com, www.facebook.com/undergangktdm, www.darkdescentrecords.com