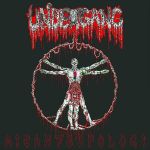 The fourth full-length by Danish Death Metallers UNDERGANG is keeping up with their brand of old school riffs and atmosphere. The album is a return to the past in all aspects, presenting simple yet very engaging riffs recorded in typical 90s tones. Despite their music carries enough characteristics similar to the golden age of Swedish Death Metal. The vocals are utter gore, almost internal, like the perception of hearing one has by growling himself. I am not particularly fond of most bands doing this, and it usually turns me down instantly, but in UNDERGANG’s case it works really well. It’s a short and in-your-face album, though, with very consistent songs from top to bottom. The distorted bass makes his presence known with several breakdown passages and the drums are surprisingly moderated in terms of brutality, but they serve the songs incredibly well. Some passages are quite fast, counterbalancing the gore vocals with harsher screams, but the core of their music is keeping it slower and precisely where they sound more poignant. There’s also a great attention to external arrangements this time, with short intros and tracks running along or in-between songs that enhance the whole horror experience. Personally, I’ve seen UNDERGANG on stage before and admit not giving the necessary attention, but this record certainly opened my eyes to them. Not a masterpiece, but the album has been growing on me as I listen to it repeatedly. Further info abut UNDERGANG at www.facebook.com/undergangktdm or www.darkdescentrecords.com