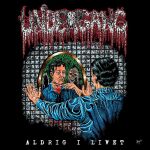 These four Danish Death dealers have been around since 2008 and over the years already released five demos, five split releases, four EPs / singles, a live album and five full lengths, of which “Aldrig I Livet” is their most current one. So, you definitely can’t call them a lazy bunch. Even though a lot of great “new” bands popped up in the worldwide underground for quite some time, to me UNDERGANG is nevertheless one of the very few old school Death Metal acts, that still manage to capture that certain aura, which made a lot of bands from the late 80s / early 90s so fascinating and special. When I listen to their material, I always have images of sick and disgusting psychopaths in my mind, that like to slash and torture, with blood and guts splashing around. If you never heard a single note from these guys, imagine the overall atmosphere of “Symphonies Of Sickness” era CARCASS, mixed with Death Metal brutality in the old Swedish (CREMATORY) or Finnish (ABHORRENCE) tradition. Everything is tuned down a lot, the vocals are deep and menacing, they never speed up too fast, add a couple of D-Beats here and there and probably most important of all, they just write killer songs! Every one of them is brutal to the max, but always has at least one killer riff that makes the song even more special. The production is raw and heavy and with ‘Menneskeæder’ (also released as a cool video) they even managed to write a total standout on this new album. I could go on a lot longer now, praising UNDERGANG in general or this album in particular, but I suppose the fact that “Aldrig I Livet” already made it into my personal top ten of the best releases of 2020 should speak for itself. Back in the early days, a review like this would always have ended with “Buy or die!” and that’s exactly what I advice you to do as well. Nuff said! For more band information check out www.facebook.com/undergangktdm, label contact: www.facebook.com/darkdescentrecords