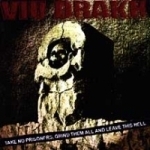 VIU DRAKH
Take No Prisoners, Grind Them All And Leave This Hell
(Moonstorm Records / EFA )
36:48min

I can’t thank good ol’ Hacker enough for introducing me to this godly band, cause ever since I received VIU DRAKH’s new CD it constantly gets played on my stereo! The band already started out in 1993 (back then as TINPANALLEY), did a bunch of tours and even released two CD’s (“TinPanAlley” in 1996 and “Noize Militia – Live” in 1997). In 1998 they changed their name into VIU DRAKH and put out the “Back To Chaos” CD. Some more tours followed until their latest ten tracker “Take No Prisoners, Grind Them All And Leave This Hell” finally saw the light of day in April this year. The biggest mistake would certainly be to expect CELTIC FROST – type music from the guys just because their guitarist / vocalist is called Thomas Fischer… Ha, these guys are far more intense than the Swiss legend ever was! Just imagine the following: TERRORIZER’s “World Downfall” gets mixed with raw and very energetic (vintage SLAYER-esque) Thrash and some Crustcore elements, while the vocals sound like a mixture of Oscar Garcia (TERRORIZER), Martin Van Drunen (PESTILENCE / ASPHYX etc.) and Wannes Gubbels (PENTACLE / ASPHYX). Their songwriting is based on a simple, yet very crushing structure, always hard hitting, fast forward and directly punching into your face! The used elements are all wellknown already, but unlike many other bands these days, VIU DRAKH managed to put them together in an incredible fresh sounding way. Unfortunately the packaging / layout of the CD looks rather poor, but who gives a fuck when the music is this awesome! Essential!!!

VIU DRAKH - Prime Beef Between My Teeth / Life Is a... - by Frank Stöver
VIU DRAKH - Death Riff Society - by Hacker