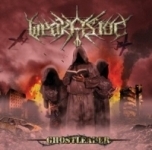 Don’t let yourself fool by the ridiculous band picture at Metal Archives: "Ghostleader", the second full length album by this four piece from the cozy East Friesian area of Northern Germany, easily blows away the majority of releases that came out the last couple of years! No, I’m definitely not exaggerating here, cause WEAK ASIDE most obviously still know what REAL Death Metal should be about in order to convince the die hards. Instead of over-the-top brutality, superfluous Black Metal influences or constant blasting, these guys concentrate on massive riffing, great vocals and an overall very old school atmosphere in general. Not even the production has this annoying modern digital sound to it, but completely crushes nevertheless! Like I already mentioned in my review for "Fire At Will" (WEAK ASIDE’s debut full length from 2007), the band still mixes up the best elements of MASSACRE’s "From Beyond", "Leprosy" – era DEATH and of course the devastating, yet simple structured heaviness of UK’s Death Metal gods BOLT THROWER. Not even a line-up change in the drums- and guitar-department couldn’t change that. WEAK ASIDE are still marching on, stronger than ever and mercilessly blow away everyone who’s crossing their path. On top of all that you get additional vocals in the good old John Tardy style that perfectly fit to the brutal Kam Lee – type growling. What I also appreciate a lot is the fact that you hardly find any blast beats (if any at all) throughout the entire playing time of the record… Instead it’s classic double bass stuff in the fast parts, hell yeah! So, in times when every band seems to try to become even more dark, more brutal or faster than the speed of light, it’s totally refreshing to listen to an album again that perfectly summarizes all those elements that once were big part of the reason why we all started to love this musical genre so much. Highly recommended! www.myspace.com/weakaside, www.remissionrecords.de