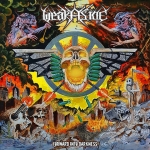 This is the third album of this German band, and one that I remember from their second album as I have it somewhere around. And things have not changed that much in their music style, as they are still rooted in the old skull of Death Metal where ASPHYX, BOLT THROWER, MALEVOLENT CREATION and IMMOLATION are the names of the game. That means the band is very riff orientated, and has that creepy melody in all that heaviness and distortion that we all are hungry for. The only quite noticeable change is in the vocals… and it is not exactly for the best. You see they used a more OBITUARY-esque vocal style that fits them so good, and once in a while they do more deep low growls. Well it seems that here we have the opposite, more low-growls and fewer of the Tardy-esque touches. Yes, they probably get compared a lot to the Florida guys for that and also a lot to the warmasters themselves, but that was never a bad thing. Low deep brutal vocals in these days to sound good must be done with an essence only a few are able to obtain. Back in the day it was a novelty that was shocking yet also fun at the same time. As the time passed, few bands were able to be taken seriously with low growling vocals and some even became a joke. Still the vocals are not that bad in that way, but I prefer the other way around. Music wise the band is again killer, they actually have a lot more control and command when doing the more mid-tempo songs, yet they also sound good and thrashy doing the fast way. All in all this is a killer album with a perfect production and execution, inspired by war and the blood it sheds. www.facebook.com/weakaside, www.fda-records.com